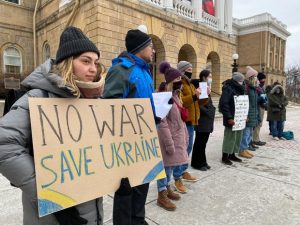 Graduate student Anna Popovych, who came from Ukraine to study sociology, participated in a small protest of Russian and Ukrainian students and teachers on the University of Wisconsin-Madison campus on Thursday February 24, to show their solidarity with Ukraine and to call for a stop to President Vladimir Putin’s invasion of the former Soviet republic. Popovych, interviewed for a story broadcast by Wisconsin Public Radio, said that her family is presently outside of Ukraine, but she has many friends who are there, for whom she is concerned about their safety. Popovych commented, “They’re not safe, unfortunately. Some of them are evacuating to the western part of Ukraine. Some of them are hiding in the bomb shelters. Sometimes it’s just basements of the buildings. Several stations in the subway are functioning as bomb shelters as well.”

Ted Gerber, Professor of Sociology and Director of the Center for Russia, Eastern Europe and Central Asia (CREECA), did not participate in the protest but was also interviewed for the story.  He said that CREECA is having an open forum for affected students and faculty to share questions and reactions to the news to be held on Wednesday March 2 at 7pm, in person or via ZOOM.