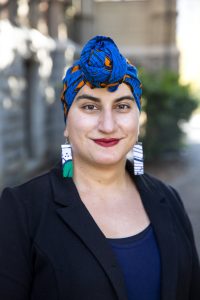 We’re excited to announce Alex and Demiana Hanna Pride Scholarship, a new fund started by alumna Alex Hanna (Ph.D. 2016) to support undergraduate students majoring in Sociology who are actively committed to and engaged in activities which advocate for and support the LGBTQ community.

Demiana Hanna was one of 11 children growing up in rural Upper Egypt. She excelled in her exams and was the first woman in her family to attend college. When she moved to the U.S. in the 1980s, she did the lion’s share of the childrearing, concentrating on raising her three children, of which Alex was one. Despite her training and education, she could not continue her accounting practice in the U.S.

Alex majored in computer science and math. She came to sociology later, after realizing that people were more interesting than computers, and that social justice is not simply a matter of moving zeros and ones around. She focused on researching social movements, computational social science, and the social impacts of technology.

During her time at UW, Alex also came out as a transgender woman, and she was supported by her colleagues and comrades. Queer and transgender people of color are often not given the care and grace to succeed, to fail, to feel loved, and to flourish. Alex established this scholarship with her mother to help support sociology undergraduates at the intersection of these identities.

Individuals can make donations to the Alex and Demiana Hanna Pride Scholarship here.