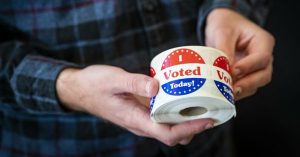 A recent study, published in the Journals of Gerontology: Series B, investigated how voting patterns change as people age. Sociology professor Michal Engelman led the research, along with sociology graduate student Won-tak Joo, sociology Professor Jason Fletcher and political science Professor Barry Burden. Using survey data from the Wisconsin Longitudinal Study, which Engelman directs, they were able to show that individuals’ commitment to voting does not decrease as they get older. It was poor health – not aging itself – that decreased older Americans’ likelihood of voting.

Access to the options of early and absentee voting was found to help people continue voting even when they have health challenges, but wealthier voters benefited from these options more than low-income Americans. “If we want people — including those less wealthy — to vote regardless of their health, our findings suggest that these existing alternative methods (early and absentee voting) are important but may not be sufficient on their own. To include a broader set of voters, we need to consider more direct outreach,” says Engelman.