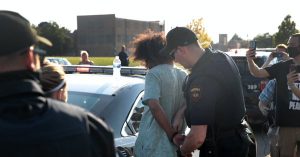 In collaboration with UW-Madison graduate students Chloe Haimson, Jungmyung Kim, and Benny Witkovsky, Associate Professor John Eason published an article in The Conversation, that was also featured in the Wisconsin State Journal, describing their research that found how racial integration and political polarization contributed to the violent demonstrations in Kenosha, Wisconsin this past summer.  The article examines the history of Wisconsin’s changing demographics and the tension among citizens and law enforcement. Eason and the graduate students work together in the UW Justice Lab. Eason was recently a guest speaker on Wisconsin Public Radio where he discussed the UW Justice Lab’s research on race, politics, and policing in Wisconsin.

Eason was on WPR this morning speaking about the UW Justice Lab’s research on race, politics, and policing in Wisconsin: