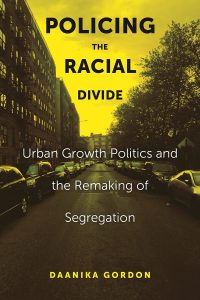 Policing the Racial Divide Urban Growth Politics and the Remaking of Segregation.

For thirteen months, Daanika Gordon shadowed police officers in two districts in “River City,” a profoundly segregated rust belt metropolis. She found that officers in predominantly white neighborhoods provided responsive service and engaged in community problem-solving, while officers in predominantly Black communities reproduced long-standing patterns of over-policing and under-protection. Such differences have marked US policing throughout its history, but policies that were supposed to alleviate racial tensions in River City actually widened the racial divides. Policing the Racial Divide tells story of how race, despite the best intentions, often dominates the way policing unfolds in cities across America.

Drawing on in-depth interviews and hundreds of hours of ethnographic observation, Gordon offers a behind-the-scenes account of how the police are reconfiguring segregated landscapes. She illuminates an underexplored source of racially disparate policing: the role of law enforcement in urban growth politics. Many postindustrial cities are increasing the divisions of segregation, Gordon argues, by investing in downtowns, gentrified neighborhoods, and entertainment corridors, while framing marginalized central city neighborhoods as sources of criminal and civic threat that must be contained and controlled.

Gordon paints a sobering picture of modern-day segregation, and how the police enforce its racial borders, showing us two separate, unequal sides of the same city: one where rich, white neighborhoods are protected, and another where poor, Black neighborhoods are punished. 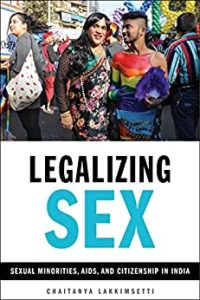 This original ethnographic research explores the relationship between the HIV/AIDS epidemic and the rights-based struggles of sexual minorities in contemporary India. Sex workers, gay men, and transgender people became visible in the Indian public sphere in the mid-1980s when the rise of HIV/AIDS became a frightening issue. The Indian state started to fold these groups into national HIV/AIDS policies as “high-risk” groups in an attempt to create an effective response to the epidemic. Lakkimsetti argues that over time the crisis of HIV/AIDS effectively transformed the relationship between sexual minorities and the state from one that was focused on juridical exclusion to one of inclusion. The new relationship then enabled affected groups to demand rights and citizenship from the Indian state that had been previously unimaginable. By illuminating such tactics as mobilizing against a colonial era anti-sodomy law, petitioning the courts for the recognition of gender identity, and stalling attempts to criminalize sexual labor, this book uniquely brings together the struggles of sex workers, transgender people, and gay groups previously studied separately. A closely observed look at the machinations behind recent victories for sexual minorities, this book is essential reading across several fields. 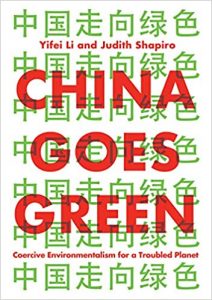 What does it mean for the future of the planet when one of the world’s most durable authoritarian governance systems pursues “ecological civilization”? Despite its staggering pollution and colossal appetite for resources, China exemplifies a model of state-led environmentalism which concentrates decisive political, economic, and epistemic power under centralized leadership. On the face of it, China seems to embody hope for a radical new approach to environmental governance.

In this thought-provoking book, Yifei Li and Judith Shapiro probe the concrete mechanisms of China’s coercive environmentalism to show how ‘going green’ helps the state to further other agendas such as citizen surveillance and geopolitical influence. Through top-down initiatives, regulations, and campaigns to mitigate pollution and environmental degradation, the Chinese authorities also promote control over the behavior of individuals and enterprises, pacification of borderlands, and expansion of Chinese power and influence along the Belt and Road and even into the global commons. Given the limited time that remains to mitigate climate change and protect millions of species from extinction, we need to consider whether a green authoritarianism can show us the way. This book explores both its promises and risks. 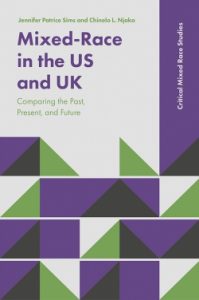 Mixed-Race in the US and UK: Comparing the Past, Present, and Future

Contributing to an emerging literature on mixed-race people in the United States and United Kingdom, this book draws on racial formation theory and the performativity (i.e. “doing”) of race to explore the social construction of mixedness on both sides of the Atlantic Ocean.

In addition to macro- and micro-level theoretical frameworks, the authors use comparative and relational analytical approaches to reveal similarities and differences between the two nations, explaining them in terms of both common historical roots as well as ongoing contemporary interrelationships.

Focusing on the census, racial identity, civil society, and everyday experiences at the intersection of race, gender, class, and sexuality, Mixed-Race in the US and UK: Comparing the Past, Present, and Future offers academics and students an intriguing look into how mixed-race is constructed and experienced within these two nations. A final in-depth discussion on the authors’ research methodologies makes the book a useful resource on the processes, challenges, and benefits of conducting qualitative research in two nations. — Emerald Publishing 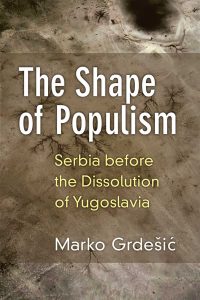 The Shape of Populism: Serbia before the Dissolution of Yugoslavia

The Shape of Populism examines socialist Serbia, then part of Yugoslavia, which in the late 1980s witnessed popular mobilization and an emergence of a populist discourse that both constructed and celebrated “the people.” Author Marko Grdešić uses quantitative and qualitative analyses to show how “the people” emerge in the public sphere. This book examines over 300 protests and analyzes them in conjunction with elite events such as party sessions. It examines over 1,600 letters-to-the-editor and political cartoons to reveal the populist construction of “the people.” Grdešić also relies on interviews with participants in populist rallies in the late 1980s to examine the long-term legacies of populism.

How did gay marriage—something unimaginable two decades ago—come to feel inevitable to even its staunchest opponents? Drawing on over 95 interviews with two generations of Americans, as well as historical analysis and public opinion data, Peter Hart-Brinson argues that a fundamental shift in our understanding of homosexuality sparked the generational change that fueled gay marriage’s unprecedented rise. Hart-Brinson shows that the LGBTQ movement’s evolution and tactical responses to oppression caused Americans to reimagine what it means to be gay and what gay marriage would mean to society at large. While older generations grew up imagining gays and lesbians in terms of their behavior, younger generations came to understand them in terms of their identity. Over time, as the older generation and their ideas slowly passed away, they were replaced by a new generational culture that brought gay marriage to all fifty states.

Through revealing interviews, Hart-Brinson explores how different age groups embrace, resist, and create society’s changing ideas about gay marriage. Religion, race, contact with gay people, and the power of love are all topics that weave in and out of these fascinating accounts, sometimes influencing opinions in surprising ways. The book captures a wide range of voices from diverse social backgrounds at a critical moment in the culture wars, right before the turn of the tide. The story of gay marriage’s rapid ascent offers profound insights about how the continuous remaking of the population through birth and death, mixed with our personal, biographical experiences of our shared history and culture, produces a society that is continually in flux and constantly reinventing itself anew.

An intimate portrait of social change with national implications, The Gay Marriage Generation is a significant contribution to our understanding of what causes generational change and how gay marriage became the reality in the United States.

“Based on three years of ethnography in Chicago’s gay neighborhood, Boystown examines the importance of sex to queer communities. Boystown is trading its radical sexual culture for normality, transforming into a “gay disneyland” through heritage commodification by business owners. The “sexy communities” that embody radical sexuality foster racial diversity by building sexual kinship through ritual moments of collective effervescence, what I call “naked intimacy.” Boystown is about the power of sex to connect across racial boundaries, the commodification of gay male culture, and the “intersectional knot” that supports respectability. I wrote Boystown in a creative nonfiction style that allows sociologists, their students, and lay readers to learn from Boystown’s queer lessons.” — Jason Orne

From Harvard sociologist and MacArthur “Genius” Matthew Desmond, a landmark work of scholarship and reportage that will forever change the way we look at poverty in America.

In this brilliant, heartbreaking book, Matthew Desmond takes us into the poorest neighborhoods of Milwaukee to tell the story of eight families on the edge. Arleen is a single mother trying to raise her two sons on the $20 a month she has left after paying for their rundown apartment. Scott is a gentle nurse consumed by a heroin addiction. Lamar, a man with no legs and a neighborhood full of boys to look after, tries to work his way out of debt. Vanetta participates in a botched stickup after her hours are cut. All are spending almost everything they have on rent, and all have fallen behind.

The fates of these families are in the hands of two landlords: Sherrena Tarver, a former schoolteacher turned inner-city entrepreneur, and Tobin Charney, who runs one of the worst trailer parks in Milwaukee. They loathe some of their tenants and are fond of others, but as Sherrena puts it, “Love don’t pay the bills.” She moves to evict Arleen and her boys a few days before Christmas.

Even in the most desolate areas of American cities, evictions used to be rare. But today, most poor renting families are spending more than half of their income on housing, and eviction has become ordinary, especially for single mothers. In vivid, intimate prose, Desmond provides a ground-level view of one of the most urgent issues facing America today. As we see families forced into shelters, squalid apartments, or more dangerous neighborhoods, we bear witness to the human cost of America’s vast inequality—and to people’s determination and intelligence in the face of hardship.

Based on years of embedded fieldwork and painstakingly gathered data, this masterful book transforms our understanding of extreme poverty and economic exploitation while providing fresh ideas for solving a devastating, uniquely American problem. Its unforgettable scenes of hope and loss remind us of the centrality of home, without which nothing else is possible. — Penguin Random House 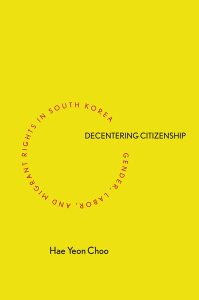 Decentering Citizenship follows three groups of Filipina migrants’ struggles to belong in South Korea: factory workers claiming rights as workers, wives of South Korean men claiming rights as mothers, and hostesses at American military clubs who are excluded from claims—unless they claim to be victims of trafficking. Moving beyond laws and policies, Hae Yeon Choo examines how rights are enacted, translated, and challenged in daily life and ultimately interrogates the concept of citizenship.

Choo reveals citizenship as a language of social and personal transformation within the pursuit of dignity, security, and mobility. Her vivid ethnography of both migrants and their South Korean advocates illuminates how social inequalities of gender, race, class, and nation operate in defining citizenship. Decentering Citizenship argues that citizenship emerges from negotiations about rights and belonging between South Koreans and migrants. As the promise of equal rights and full membership in a polity erodes in the face of global inequalities, this decentering illuminates important contestation at the margins of citizenship.