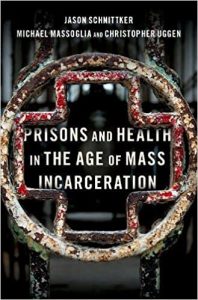 In an age when over two million people are incarcerated in the United States alone, the wide-reaching impact of prisons in our society is impossible to deny, and the paradoxical relationship between prisons and health has never been more controversial. Prisons are charged at the same time with being punitive and therapeutic, with denying freedom and administering treatment, with confining and rehabilitating. And they are not living up to the charge.

Prison and Health in the Age of Mass Incarceration examines the connection between prisons and health. Based on a decade of empirical research, this book explores the consequences of incarceration on inmates themselves; on the families they leave behind; on the larger communities to which they return; and, ultimately, on entire health care systems at the state and national level. Jason Schnittker, Michael Massoglia, and Christopher Uggen demonstrate that the relationship between incarceration and health is sustained by a combination of social, cultural, and legal forces, and by a failure to recognize that prisons are now squarely in the business of providing care. With an eye to the history that led us to this point, the book investigates these connections and shows how prisons undermine health and well-being.

An evenhanded and comprehensive analysis, this groundbreaking volume demonstrates that the prison system produces unintended and far-reaching consequences for the health of our nation and points the way for a fairer and more effective justice system.