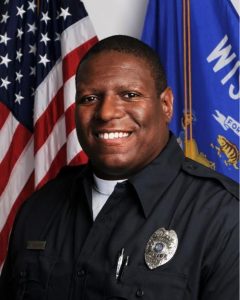 Governor Tony Evers appointed Kalvin Barrett as the next Dane County Sheriff. Kalvin graduated with a BA from UW Sociology in 2004; he also played football for the Badgers during his time as a student.

He has since served as Dane County deputy sheriff and as an officer with the Sun Prairie Police Department, where he was the first Black officer on the force. Until he takes his new role on May 9, he remains a law enforcement officer at Wisconsin State Fair Park and the faculty director of the criminal justice studies program at Madison College.

In a statement, Kalvin said, “I am excited to bring to the job my perspective as an African American professional who has experience in the field as a peace officer, in the jail as a sheriff’s deputy, and as someone who has educated and trained the next generation of peace officers.”