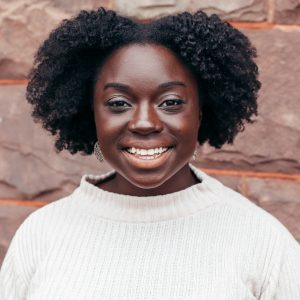 The Graduate Student Service Scholarship recognizes and honors the graduate students who volunteer to take on service roles in addition to their research, work, and family obligations. While service can come in many different forms and all service to the university is appreciated, priority for this scholarship is given to students who conduct multiple service activities and/or whose service activity is notably impactful.

The Graduate School recognizes that graduate students belonging to underrepresented groups disproportionately engage in unpaid service to the academy. While a scholarship alone does not rectify historic and current disparate expectations and obligations, this award is designed to reward and value graduate students’ service roles that shape the university’s future.

In the award announcement, the Graduate School note how during her short time in Madison, Ruby has made a lasting impact in her department, campus, and broader community. As a critical scholar, her research on race, gender, and education has shaped her ability to offer suggestions to her department which, like other departments, is committing itself to improving the experiences of historically marginalized students. Ruby is also the current president and previous social chair of the Black Graduate and Professional Student Association (BGPSA) at UW–Madison.

Through her role as president Ruby worked with BGPSA’s executive board to organize general body meetings and several social and academic events. Ruby’s involvement in the BGPSA is instrumental for building community amongst and improving the retention of Black students. Although she does not consider it a service to speak out against racism or emotionally support a friend, Ruby’s unpaid service is particularly notable. Ruby is a Black woman whose emotional, mental, spiritual, and physical health has been harmed by racism and sexism and yet, she has continued to support her community during a pandemic. Her service as an advocate for racial justice within and outside of her department has made a lasting impact.